Garbage Disposal is a Problem

Ecuador, city of Palora, I see a couple walking down the street. They go across a bridge. Before they finish crossing that bridge they throw a bag of trash into the River.

On city streets you find a caramel wrapper. Which then subconsciously opens the way for John Doe to drop his sticky note with five numbers on it that he’s been holding onto for three weeks. Later leading Jane Doe to subconsciously drop her ink-less pen she used to write the 5 numbers.

That’s the problem with trash and the human psyche. We see someone else not care about the planet and think “Well they don’t care so why should I? Even If I did try they would keep trashing.”

I’m staying in Ecuador right now and it’s dirty. I mean I thought Seattle (WA, USA) was dirty (which it is, it’s ridden with needles and pot… oh and Starbucks cups), but Ecuador is filthy there is trash in the streets, rivers and streams, speaking of streams they are all completely brown. 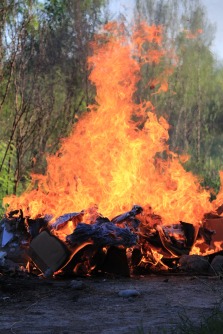 You’ve heard of the tragic fires in California, which are mainly due to a hot and dry climate. That doesn’t quite happen in the wet Ecuador climate. Here in Ecuador they don’t have a place to dump old wood, furniture and thinks of the like, so what do they do? They burn it.

Burning trash leads to health problems and creates an environment that diseases love. Remember your mom shooing the flies away because flies eat poop? Well maybe that’s just me… But you get the idea. Poop, trash, disease they are the three amigos of death. Just another reason why disease spreads so easily in poor countries.

A month back I did a dump run in the Seattle area, it was a new place, and I wasn’t sure if it was a hospital or a dump. Well that’s a bit of an exaggeration, but it was really clean, this is a dump we’re talking about!

In poor areas/countries there is no money for nice dumps or dumps in general. People generate around 0.74 kilograms (163 pounds) per person per day… that’s disgusting.

Imagine 163 pounds of trash showing up at your door everyday and you have no dump to drop it off at. What are you going to do with it all? This is kind of the dilemma poor countries face.

In October, 21 people in Indonesia died because of a flood. What helped cause these floods in poor countries? You guessed it, trash. When trash is tossed in and near waterways, in time the trash becomes a plastic dam reducing water flow and release threw drains.

Interestingly, if you look at this most trash produced per person list, many are coastal countries many being islands. A big cause is a lack of landfills which leads to burning the trash. Also, let’s be honest, if you live on an island there isn’t much room for a dump and exporting is expensive. There isn’t a whole lot of cheap options.

Another problem is human waste, sewage. Yeah… I’m gonna leave that topic for another time.

A thought I have on this list is that many of these places receive many tourists. So, many tourists, not much land, equals lots of trash per person that probably isn’t gonna be discarded of properly.

What Can You Do?

My thoughts on what can practically be done on a per person way.

2 thoughts on “Trash – A problem in your country?”

This site uses Akismet to reduce spam. Learn how your comment data is processed.